We are India’s oldest distribution house for Hydraulics. We set up business in this field in 1986, long before selling hydraulic components and spares via a network became fashionable. Since then, we have been doing what we love – represent various international brands in India and more importantly, design and offer high-end, energy-saving hydraulic solutions to our customers. With over 30 years in the field, we are a name to reckon with in hydraulics.

We understand the standards and norms followed by our customers in their manufacturing process. We identify the challenges they face in terms of efficiency, output and productivity. The HVK Engineer, from our locations at Chennai, Coimbatore, Bengaluru, Hospet, Hosur and representatives at Madurai and Puducheri, is a familiar face at all our customer locations. Given our motto of service before sales, we are a welcome vendor to all organisations that have a significant percentage of operations based on hydraulics.

Today, HVK, with the wide product range that it brings with it, in addition to those that it designs and delivers, is a name to reckon with in its chosen field of Industrial Hydraulics.

The flagship company is located in Chennai and Coimbatore. In addition it has representatives at Puducherry and Madurai apart from a resident engineer at Hosur. The company stocks hydraulic units and spares extensively at both its principal locations. It is the authorized distributor for Eaton products in Tamil Nadu and Kerala besides being the all India distributor for Yeoshe and Coolbit range of products and the South India distributor for Chia Wang range of products. The company has over 1,500 customers ranging from OEMs to automotive giants and steel mills. HVK Systems is known for its logistic prowess, being capable of locating hydraulic components required urgently by customers and sourcing them from various parts of the world.

The Bangalore based trading company of the group, which is the authorized distributor for Eaton products in Karnataka. The company has over 700 customers ranging from large steel plants to small machine shops. It also has a resident engineer in Hospet.

The manufacturing arm of the group, HVK Machines is located in Coimbatore where it functions out of an independent location. It specialises in the building of hydraulic assemblies, known as power packs in the industry. These comprise standard offerings as well as bespoke solutions. A design team in HVK handles the requirements in terms of circuitry, layout and dimensions.

Born on October 14, 1936, our founder Mr. N. Krishnan had his schooling in Delhi and was a B-Tech from the 1957 batch of IIT Kharagpur. He then studied at the Loughborough College of Technology (now the Loughborough University), UK, thanks to a Burmah Shell scholarship. Returning to India, NK, as he was known, worked in the automotive industry before turning entrepreneur in the 1960s. Having successfully run manufacturing entities, NK set up HVK in 1986 as a distributor for Vickers Systems International Limited, now Eaton Fluid Power. HVK was the first of its kind in India, for Vickers and for that matter all hydraulic manufacturers till then handled supplies directly to customers for replacements and spares. The success of the HVK experiment saw the appointment of 17 other distributors for Vickers across the country in later years. The HVK model also became the standard that was emulated by all other hydraulic manufacturers and today, selling via a distribution network has become the norm. 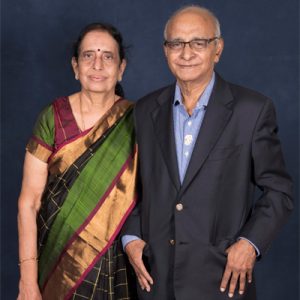 The HVK Group became known for its solution-based approach as opposed to simply selling what was on offer. NK coined the phrase Service Before Sales and that became the motto – it was necessary to understand what was the pain point of the customer and solve it before attempting to sell anything. This was an arduous route to take to build loyalty but it proved most effective in the long run. Today, the HVK Group can boast of being vendor to a large base of industrial hydraulics consumers.

Systems, adherence to commitment and professionalism in all dealings were the hallmarks of NK’s style of management, all of which are the basic tenets on which the HVK group operates. NK created a team of people who became passionate adherents to the HVK style of management and running of business. While many stayed on to spend their entire careers in the company, others who left carried on the same practices in their work life, earning laurels. NK’s inspiring leadership ensured that most past employees became part of a worldwide HVK family, with great goodwill to the mentor who had inspired them. He too on his part, never hesitated to spend time to counsel whoever came seeking it from him.

Apart from running his businesses successfully, NK found plenty of time for a wider social circle and for charitable causes. He was President of Round Table India in 1976. He was Charter President of the Rotary Club of Ambattur. In Rotary circles he was known especially for his espousal of International Service and within it the Group Study Exchange and Semester at Sea programmes. He was a President of the Ambattur Industrial Estate Manufacturers Association as well. He was a mentor to several young entrepreneurs and in this capacity was actively involved with the BharatiyaYuva Shakti Trust. In 2017, he received this body’s Excellence in Mentoring Award, which was given to him by Prince Charles, the Prince of Wales. In 2018, NK received the Distinguished Service Award from his alma mater, IIT Kharagpur. In his personal capacity, NK established a charitable trust through which a substantial part of his earnings went to deserving cases in the fields of education and healthcare.

An exemplar of simple living, high thinking and a lifelong adherent to the principle of positivity in thought, NK became a mentor to the employees of HVK as time went along. He passed away on April 23, 2021, mourned by a wide circle comprising family, employees past and present, friends and above all those whose life his kindness had touched. The HVK Group resolves to continue on the path he laid out for it.

The company was co-founded by Hema Krishnan, presently the Jt Managing Director. Beginning from the time when she was virtually the first salesperson of the product range, Mrs Krishnan has had considerable influence on the way the company has grown, in particular with reference to its human resources, internal systems and procedures.

Our organisation, like any other, is what it is because of its team. The experience, knowledge and expertise of its members makes all the difference.

Our team comprises sales and service engineers, design specialists, planning engineers and warehouse technicians. They have brought in their expertise from many years of knowledge acquired in-house and from related/allied industries where they worked prior to joining us.

Our industry expertise is across a varied range of verticals, in keeping with the diversity of our country.

Some of the industries with which we work include:

HVK believes in providing the best possible infrastructure for carrying on a distributors business catering to customers purchase and service needs.

The HVK offices are located in the heart of the city’s business
district, a stone’s throw from the main business centre of
Mount Road (Anna Salai). The warehouse here has servicing
facilities for dismantling, servicing and assembly of
components.

HVK House in Coimbatore is a landmark, located on Trichy
Road. With an extensive warehouse and a two-storied office,
this has emerged as a key location for the company in the last
two decades. In addition, the company has an extensive
assembly and testing facility on Pollachi Road. This handles all
testing requirements for the company as a whole.

The Bangalore based trading company of the group is the
authorised distributor for Danfoss products in Karnataka. The
company has over 700 customers ranging from large steel
plants to small machine shops. It operates from Peenya.
Hospet

Begun as a representative engineer’s office, this has now
expanded to offer service as well.